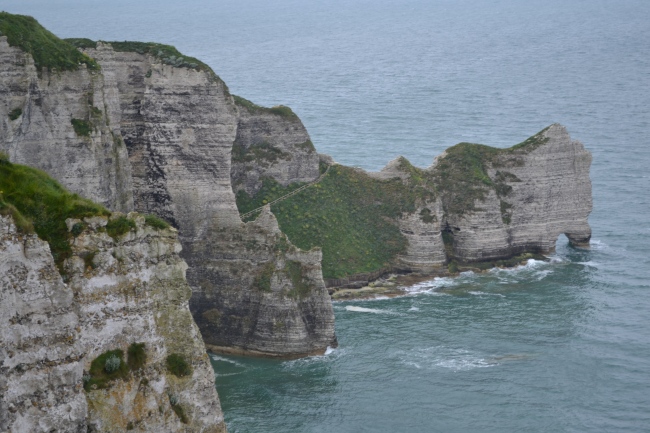 We decided to change the SatNav from the green route to the Easy route and also to include the roll road, which would include the “Pont de Normandy”, else the journey would’ve been twice the distance of the 48Km… It was worth the 6.2Euros, and not a bad view either 🙂

The campsite is very good, and it’s a municipal run one; one one site is the basic motor home stopover and other the campsite with the additional facilities.  I haven’t included the below photo to show that Gail is doing her share of the tasks, but that the washing up area has some useful draining racks; the 1st we’ve seen in France or in England. 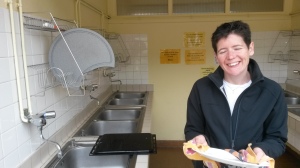 The town/village of Etretat is very pretty. All the houses and gardens walking into the town from the campsite are very pretty and well maintained; we thought we might have walked into the set of “The Stepford wives”… At the sea there are some impressive cliffs either side of the pebble beach, which looks like there is a bit of walking…rather than stay just for 1 night as we had thought before arriving, we have now changed our minds; not for the 1st time I’m sure 🙂 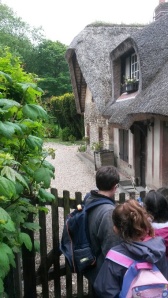 We had some good news and a learning experience whilst here, both related to the TV. We managed to sort out the Satellite so that it could point to another other than the default 4 set up and also found one that transmits a limited number of channels in french. The learning experience was that after tilting the TV to have a better picture, once we pushed the TV back into its locked travel position, it collided with the power lead connector and snapped part of it, which in turn as it turned out blew the fuse. We found out that this fuse also powers one of the USB sockets that we use to charge the phones.

We’d packed up the motor home mostly on Friday and completed the final bits etc on Saturday before setting off on our first trip since coming to France. We plugged our destination of Honfleur into the SatNav system and off we went.

We left about midday which meant that there was even less traffic on the roads as most people were preparing or having their lunch. We stopped to prepare and have our lunch about 1:15pm in a parking stop, though just as we were about to start eating a bit of a strange man came over and told us that the parking, which was large, was private and related to a cafe/restaurant and that we could stay if we go in and have a coffee. We weren’t that bothered by a coffee so we moved on and luckily found another place to stop after about 15 mins.

The final part of a the route was “interesting” as we had put to avoid toll roads and the current setting of the SatNav was to select the most economic route. This meant that for the last 10Km we were travelling on county lanes. Luckily only on 1 occasion did we come across some other cars coming the other direction that caused us having to reverse; luckily not too far 🙂 However, this route for entering Honfleur was down some small back streets in the town and due to how one car was parked we needed to mount a narrow curb, fortunately there was just enough space; not quite so easy in a motorhome as in a car…

Once we got to the campsite although it looked like there was lots of space, we found out that over half of it was shut due to some extreme rain that they had had and the ground was soaked and at first they said there was no space. However with Gail practising her French we managed to get a slot parking on the hardcore road between some of the soaked grass pitches; our electric cable was just long enough to hook up to the supply… Due to the “problems” due to the weather, they gave us a 20% discount on the price 🙂 (30.40 Euros for 2 nights)

The campsite was OK, though it did have a superb location almost in the centre of the town. Afterwards we happened to find a location for a stopover for over 300 motorhomes also in HonFleur, cheaper, though like a car park; it depends on what you want!!!

Honfleur is a very pretty, and touristic, town by the sea. It retains lots of it’s old charm and narrow winding streets and old buildings; there was a lots of restoration going on as well of some of the buildings maintaining their character. 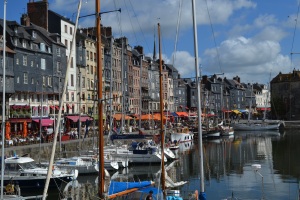 We properly christened the BBQ, using the grill plate, with whole mackerel that we had brought from the fish stall. They were very good if I have to say so myself; we add a mix of a bit of oil, chilli sauce, pepper and a bit of rosemary and rubbed this onto the fish before cooking each side for about 5 mins. I’m looking forward to cooking many other things on our BBQ, including breakfast every now and again…

Although there was no WIFI on the site with our attenna booster we managed to pick up a local free connection and could even stream a bit of french TV to aid our continued learning; our satelitte systems picks up the UK feed. We’ve a hard disk full of programs to watch in Spanish when required 🙂

On Wednesday evening Andy and Alex had invited a couple of their English friends, Paul and Sue, for dinner.  Gail and I made our version of a Paella and as well as a plate of cheeses, Andy had made an apricot crumble.  We’ve never had this before and it was fantastic; it seems to be apricot season over here at the minute so I think we may well be having some more…  If you have a chance and haven’t tried this before then I’d give it a go 🙂

Keith has also finished his french lessons as of last Thursday; now we’ll see how much he actually knows… in truth Gail’s french is pretty good, though with practise she will eventually be happy with it 🙂

We’re off from Saturday or so for a trip in the Motor home whilst the house is rented out for about a week.  We’re planning on going up the the area near to Rouen.  We’re looking forward to it, though hoping that the weather improves from what it has been these last couple of days.  Each time I’m sure that we’ll load up the motorhome slightly different to make it better balanced and use of the space; yes, I’ve already juggled with things that are going in the garage 🙂

On Sunday evening we went to some of the neighbours with Andy and Alex for some “aperitifs”.  The wine was very good, as were the pizza that Sandro made.  He’s Italian and a very good cook; he made the pizza’s for the youngsters, i.e. Gail and Keith… 🙂

Gail’s parents arrived on Wednesday and hopefully it’ll help with the recovery of Gail’s dad.  They have certainly brought the weather with them.  We actually had a BBQ and I could cook in glorious sunshine 🙂

I moved the motor-home back so that Gail’s folks could get the the car into the garage.  That had the added benefit that the Satellite TV worked as it could pick up reception between the house and a large tree that had been previously beside the motor-home; this was important as there was the Europa cup final that I wanted to watch and there was a clash with the English programme watching in the house.  This was also useful as good preparation for the World cup so they’ll be no viewing clashes 🙂

We’ve got another week in the house before we go off somewhere in the motor-home for about a week.  We’re unsure of the destination as yet, though it’ll probably be around the area near to Rouen.  Fingers crossed that the weather stays for a bit longer…

If you want to hear about an evening where we BBQ’s apparagus whilst watching the football, then I’m araid that you are going to be disappointed as the 3 topics in this case are not related.

We have now checked that our new BBQ works connecting it to the external gas point from the motorhome, one of the last major things to check, though it is still to be used in anger to actually cook something; next time 🙂

Yesterday we brought some white asparagus, it was definitely the 1st time that we were going to cook it.  Luckily just before cooking, we found out that we need to peel it and cook it for longer that it’s green cousin.  Luckily the internet saved the day, though as we hadn’t had green asparagus for quite a while we don’t know which one gives your wee a stonger smell of sugar puffs..!!!

Yes it is near the end of the football season, which I’m sure is great for some, but not for others; we also have a split household.  However, there still remain what could be some cracking matches; the final premier league games tomorrow, the Europe cup final, the FA cup final and then the Champions league final.  That said, being an even year, there is only about a 3 week gap and then in this case it is the World cup that will begin and last for about a month; luckily we have the  motorhome which also has a TV 🙂

gailandkeithblog
Create a free website or blog at WordPress.com.