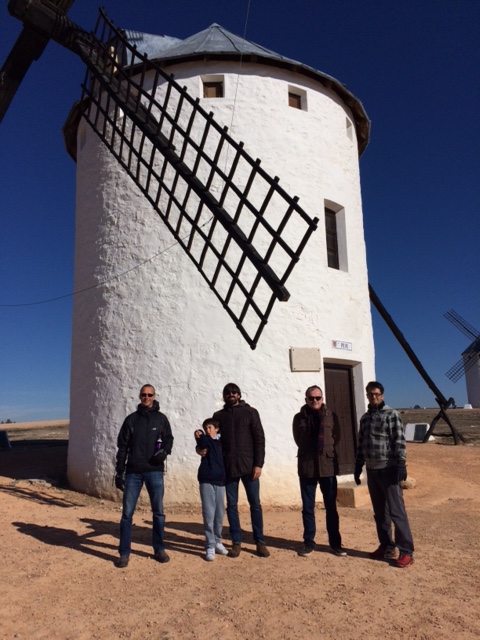 After my failure with soda bread you will be happy to hear that I have returned to making rolls again, although we have now completely run out of our Waitrose flour that we stocked up on before we left home and the mix is pretty much 50/50 White and whole meal, with a handful of both Sunflower seeds and Linseeds thrown in for luck…. although I forgot the linseed this time!  They were however super light and fluffy, although to be fair anything would have appeared light and fluffy after the rock like Soda Bread rolls I made previously, which was why it surprised me so much when Keith bit into his first roll and found something hard – I was distraught – thinking I had lost my touch until Keith realised that it was a tooth that had finally given up and decided to make the most of the soft bread cushioning to break free!  Thankfully Keith wasn’t in any pain but it was a tooth that had a large filling from a long time ago and the tooth had cracked so a visit to the dentist was inevitable!

The dentist was friendly and reasonably priced and Keith is certainly getting his monies worth as despite the Dentist originally planning on doing an ‘inlay’, he soon realised he couldn’t so has given him a temporary filling until next week when he goes back to have a crown…. I guess we should consider ourselves lucky that we have survived this long without needing any dentistry work abroad.

Having been here for just over five weeks and with the nights getting colder (yes, believe it or not it has been down to about 6 degrees in Alicante …. positively chilly!) therefore we have required a bit of heating over the last week or so, we decided that we should probably go fill up with LPG, give the water tanks a bit of a shake and clean, whilst at the same time popping into Decathlon.  We were amazed by the fact that we didn’t come out with our arms full as we normally do – I would like to say that we are reigning in our inability to control our (ok maybe it is just my) sports clothes/accessories addiction but I think it was simply the fact that they didn’t have such a great selection this time…. he ho, saved for a couple more months at least!

As we have now entered December the Duel of the Tapas has started again in El Campello. So as always we feel obliged to go along and try a few to get to know some new places as well as enjoy their culinary skills.  We were fairly reserved last Friday night and only tried four places, the first was a waste of space as every time the barman was asked for a drink he huffed so loudly we felt that we were imposing on his personal space, needless to say he couldn’t be bothered to do the Tapa or perhaps just didn’t have the ingredients but whichever it was, we won’t be going back.

The second place offered an aubergine stack … I was going to say quite impressive for Spain to have a veggie Tapa but apparently there was some bacon hidden in there somewhere – it was also very good. The third was a wine bar whose Tapa also appeared to be veggie from outside but they had also sneakily added a bit of cured meat but it was exceptional, a small slice of bread topped with goats cheese, caramelised onion, cured beef, watercress and a fruits of the forest reduction. The final Tapa of the night was a roll made with squid ink, filled with Calamari and crunchy fried onions …. taste was excellent and presentation the best yet … scoring a 5/5 from us all.

The Duel of the Tapas goes on for a month and each time you try one you get a small beer or wine and the Tapa for 2.50 euros (although you do normally pay a little more if you choose wine) and you vote for the winner of the competition…. I am sure we will be trying a few more before the end of the month!

December 6th and 8th are two public holidays in Spain, so along with a couple of friends we headed off to Cuidad Real which is South East of Madrid, just under 400km away where Alfredo, another friend of ours lives.

Cuidad Real isn’t really known for much apart from its food which always bodes well for us but may not be high on everyone’s list.  The town used to have a 4km wall and 132 towers protecting its Christian, Jewish and Muslim population but over the centuries they have all pretty much disappeared leaving a fairly new shopping centre and only one or two buildings that date back to the 13th Century.

Needless to say we met for tapas and lunch trying out some of the regions specialties including ‘Migas’ (breadcrumbs fried with Chorizo and Pancetta and other lovely things) and ‘Caldereta Manchega’ (Lamb stew with potatoes) before heading back to Alfredo’s family country house where we lit the fire and baked potatoes in its ashes to eat with lots of lovely cheese and meats, all washed down with a mixture of red wine from the region and beer whilst watching the football.

Although the skies were blue and the sun was shining, the open fire was welcome as the temperature dropped to around -3 over night, although we did also have central heating in the house.  The morning brought blue skies and frost on the ground and set out to explore the garden with Alfredo’s father who had arrived to do some pruning of the grape vines and tend to the garden – 5000 sq.m in total giving them a sizeable veggie plot, tennis court, swimming pool and chickens.

After a Spanish breakfast of Panetone and coffee we set off in the car to find the setting of Don Quixote written by Miguel de Cervantes Saavedra.  For those of you who haven’t ever heard of Don Quixote it is a Spanish novel that was written in early 1600’s, considered to be the most influential piece of Spanish work of literature of all times.

Don Quixote talks of the tilting of the windmills …. and we found the windmills that are described and it is fair to say that it is a fairly stunning setting.  However, with not a huge amount more in Consuegra than the windmills we headed off to the ‘Lagunas’ (Lakes) for lunch and a short walk.

Lunch was excellent, enabling us to try some more local delicacies including ‘Atascaburras’ which is mashed potatoes with cheese, eggs and walnuts and I tried something I can’t remember the name of that was eggs with chorizo, cheese, mushrooms and pancetta – delicious!  All the starters were followed by meat – what else in La Mancha – and home made desserts of rice pudding or cheesecake.

Despite spending a fair amount of time in the car during the day we still decided to head back to Alicante which was another four hours drive …. slightly longer than expected as the cheesecake had disagreed with Manolo so we had a couple of enforced stops!

A good couple of days away but happy to be back at the motorhome and in our own beds again.  The food was excellent but it was rich so although we were out again last night with some other friends, it is nice to be eating slightly less rich food and doing a little bit of exercise!

We have had a busy couple of week of cooking as well so I have added some of the recipes that I haven’t shared previously onto the blog.  Keith made his first motorhome Gravaldax with the 4 euro bottle of gin and it was great (and has subsequently made teh second), he also decided to try his hand at Pitta breads which came out brilliantly and take less time to prove so possibly another option if we don’t have two and half hours to make bread! We have also made a couple of dinner dishes – an old favourite Kedgeree, although they generally don’t have smoked fish in Spain so we just used cod loin.  We also made BBQ Baked Beans with Sweet Potatoes which is a veggie wonder – full of flavour and warmth for the winter.  Finally today, we risked enforcing a bit more of England on Manolo and Santi  by making Fish Pie which went down well…. although we still can’t get them to eat any veg if it isn’t actually part of the dish itself!  As it is coming up to Christmas the first batch of  Fruit Cake Muffins also came out to come with us to Cuidad Real which were very tasty although could have probably been cooked for a couple of minutes less in our oven to keep them a little bit more moist.