Now we have spent a bit longer in Ava (the campervan), we have had the chance to get to know her a bit better.  It is a bit of a change from the Concorde …. but all in all, for her size, the configuration is really good, the bed is comfy, the lounge and seating area is fantastically light and spacious, the only thing that takes a bit of getting used to is the combined shower/toilet and remembering that we need to take the loo roll out before we have a shower – so far so good!

It’s great though as being in a smaller motorhome means that you appreciate what you have all the more and we are so glad that we decided to do this trip in a motorhome rather than a car and hotel/airbnb as even only after a couple of weeks we have parked up in some beautifully tranquil spots, waking up to amazing views and we can only see this getting better as we head further South.

After a lovely run from Rainbow Falls in the humid sunshine, the cloud started to close in dampening our hopes of eating breakfast outside … thankfully not literally as we stayed inside but it was fair to say that the best part of the day had gone by 9am.

We hit the road again and after a impromptu/subconscious detour via Kawakaw to see the famous Hundertwasser toilets we headed back to John and Lorraine’s to cook them some Paella for dinner.  Although we still have eleven weeks in New Zealand, we were heading south of Auckland and they flew out to Nelson for the weekend so the likelihood of us catching up again before we actually leave was minimal.  As always, it is such a treat to have locals who show you a different side to a country and we couldn’t have had a better introduction to New Zealand, we were even introduced to Pinapple Lumps – although we were a little aprehensive when they were described to us as pinapple encased in chocolate – assuming they were crystallised – however, we were pleasantly surprised when we tucked into them and found effectively what can only be described as pinapple flavoured honeycombe encased in chocolate … a real flavour burst… we get it now!!

Waking to birdsong and after a walk down and along Long Beach in the morning – something to do with the fact that last week I went the wrong way when I went out for a run – we popped by the local butcher and then headed South, tackling the Auckland traffic – which was practically non existent at mid-day – towards a place called Ray’s Rest, recommended by Geoff and Tracey.  We parked up and ate our lunch whilst looking out over the bay and Wetlands before heading out for a walk towards the Miranda hot springs with the black clouds looming.  Unfortunately they didn’t ‘loom’ as long as we had hoped and 6km in to the walk the skies opened and it poured down.  Rather than battling on, we decided to turn around and head back to the dry where if it had been a nice day we would have been able to watch a lovely sunset, instead we settled in and Keith cooked a lovely Chilli Con Carne … although he forgot to add the kidney beans…apparently that is how they do it in the USA so as we learnt at the Smoke and Fire Festrival over the summer …. again the subconscious kicking in – It was still very tasty though!

Waking to the sea lapping about two meters from the motorhome we admired the view out of our bedroom window – what a fantastic thing to do – before our normal morning routine and heading off towards the Coromandel Peninsula and more specifically Coromandel town. 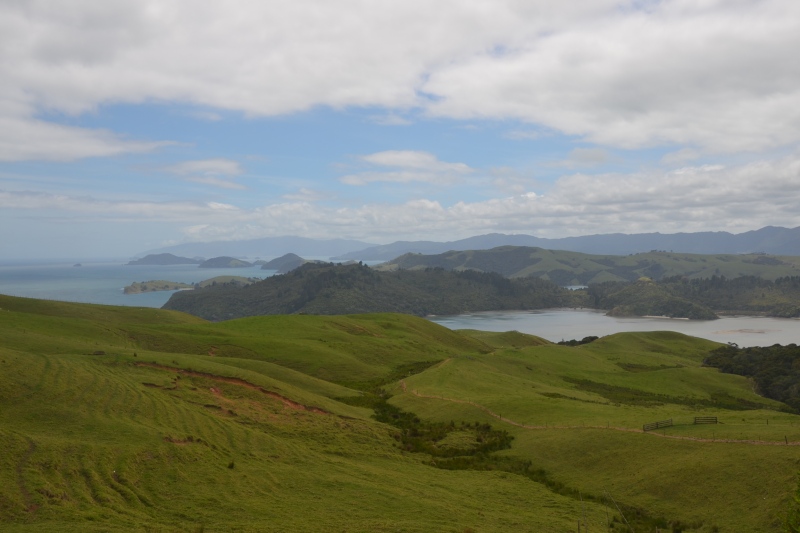 What an amazing journey – the road twisted and turned and each time it did, the bay looked beautiful but in a different way.  It wasn’t however until we climbed up into the hills and looked down over the peninsula that we really got to appreciate the full beauty of it all … personally, I would say even more beautiful than the Bay of Islands, although I am sure that I will get criticism for such an agressive opinion!! 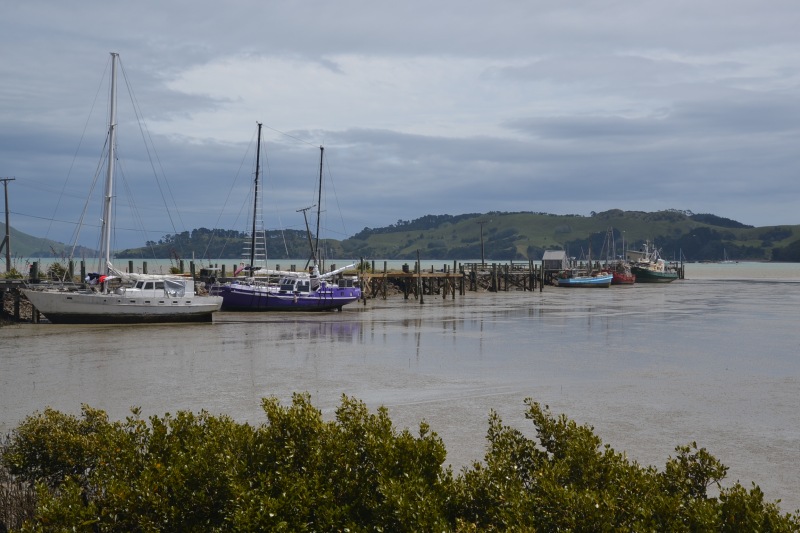 We parked up at the NZMCA site in Coromandel ($3 per person, per night) which is pretty average as a site goes but it is in a fantastic location. After lunch we walked out onto the Wyuna Bay which is on the peninsula where thankfully most of the houses that were for sale that we walked past didn’t have a price on them as we would have happily signed on the dotted line there and then …. the photos don’t do it justice, it was stunning! 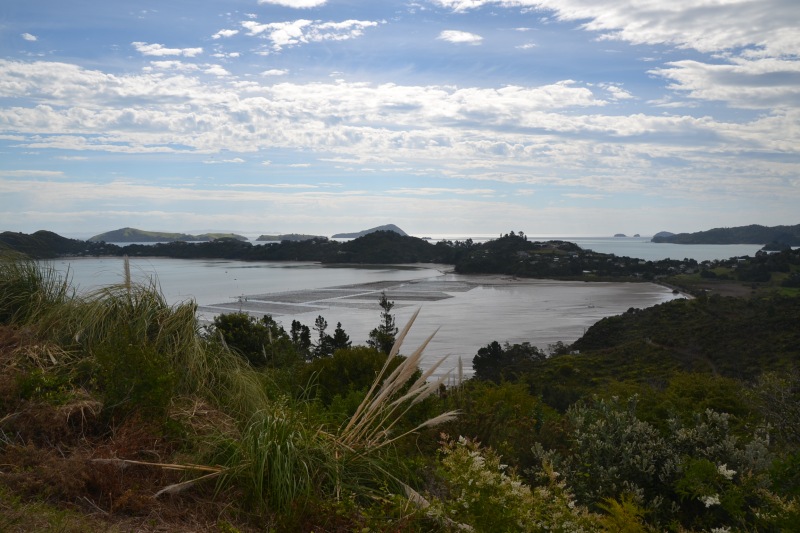 Coromundal is home to many of New Zealand’s Mussel farms and also I believe a fair few Oyster farms as you can see in some of the photos. It is a small town centralised around fishing with a fair few cafe’s, bars and restaurants – not bad for a stopover.

In the morning after a quick empty and fill, we set off on the long windy road over the top and down into Whitianga.  Although different to the West coast of the Coromandel peninsula, it was beautiful in a different way.  We had been invited to go and stay on Karen’s parents driveway but we didn’t want to impose so instead, we parked up at the NZMCA site just at the edge of town which again was $3 per person per night.  It is a fairly new site, peaceful with just grass and a fresh water tap – perfect for what we needed.  As we arrived reasonably early we decided to walk into town and eat our sandwiches on the bay ….  stunning. 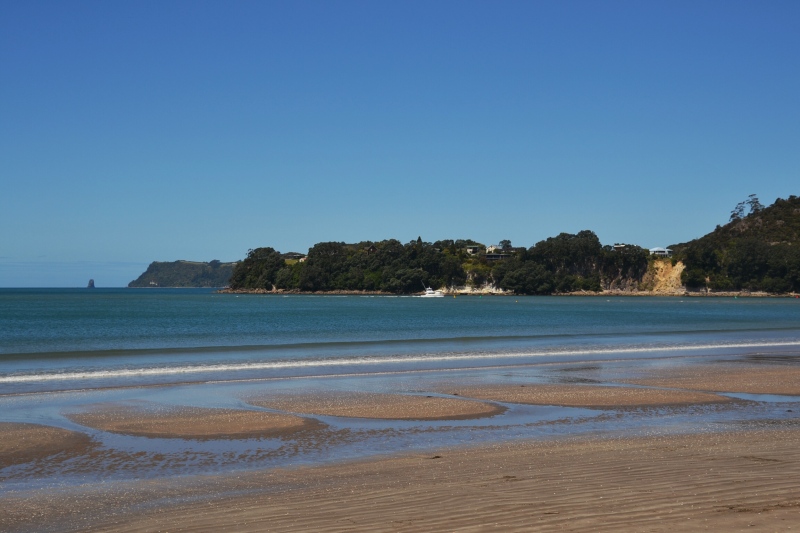 It is obvious that Whitianga is a fairly touristy town due to the Nature Reserve, Cathedral Cove and the Hot Water Beach which are not too far away but it also has a ‘real’ town feel which gives it a lovely ambiance.  Although we didn’t go stay with Karen’s parents, we popped over with a bottle of wine and some beers for a drink and took in the afternoon sunshine with views out onto the estuary – what an amazing position for a house.

Lots of lovely stories, a bit more wine, a cheese platter which ended up evolving into dinner and we had lost five hours – a lovely evening!

We had obviously worn out the sunshine as we woke to grey cloud and rain and despite having been told that the weather forecast was rarely right, it appeared to be pretty spot on today unfortunately.  We had planned to stay a couple of nights and take a boat round to Cathedral Cove but as the forecast was grim for a couple of days we bit the bullet and decided to move on although as we were driving close to Hahei Beach – which is where you can park and walk to Cathedral Cove – we decided to take the detour as the rain had stopped for a bit.  It was obviously fate as it stayed dry for the majority of the walk and the weather had kept the majority of people away, enabling us to enjoy a ‘moody’ Cathedral Cove in peace!

As the day went on and we headed further south the clouds lifted giving us some hope that we were going to be moving to nicer weather.  Parking up at Waihi Beach NZMCA (again $3 per person per night) we managed to get out for a walk and get the first BBQ in, unfortunately however, Monday morning brought with it low cloud and rain … thankfully not until 9am so we got a most dry run/exercise in.  We decided to hold out on setting out to explore in the hope that it might dry up catching up with some work…. ah well, has to be done at some time I guess!

The rain did ease a little just after lunch so we decided to make an exit and walk along to Waihi Beach with the hope of walking up to the trig point and seeing the views out over the bay.  Unfortunately no sooner had we left Ava, the rain started to fall again so we settled for a nice walk to the surf club, checking out Waihi Beach and the waves on the way… not too bad really and the rain did give us a break on the way return leg – we can only say that as it really chucked it down after we got back!

After a lovely Kedgeree and a good nights sleep we woke to blue skies and a little too much warmth (we had left the windows mostly closed to stop the rain coming in).  Quite quickly the clouds started to come in just as we were eating breakfast but we weren’t going to be put off and decided to drive out to Waihi to do the Hauraki cycle track out to the Karangahake Gorge.  Roughly 30km later and with a sore back (me – I am so not used to being on a bike any more) –  we were happy, although rather (sweaty) bunnies!

Happy to sit on a normal seat rather than in a saddle we headed to Tauranga where we parked up at an RSA (Returned and Serviceman’s club) for the night in one of the suburbs and settled into some delicious New Zealand Lamb for dinner.  It was busy … I think that the line dancing turned into a bit of an open mike night before calming down by about 10pm providing with us with a reasonable nights sleep!

With the sun still on our side – I have to say that as it is threatening to disappear on us – we headed over to Mount Maunganui this morning which is just the other side of the Bay of Plenty and sits 232m above sea level. The area itself surrounding the mount has fantastic surfing beaches and a real cafe culture and if you take the path up to the top of Mount Maunganui, it provides the most amazing views over the bay. 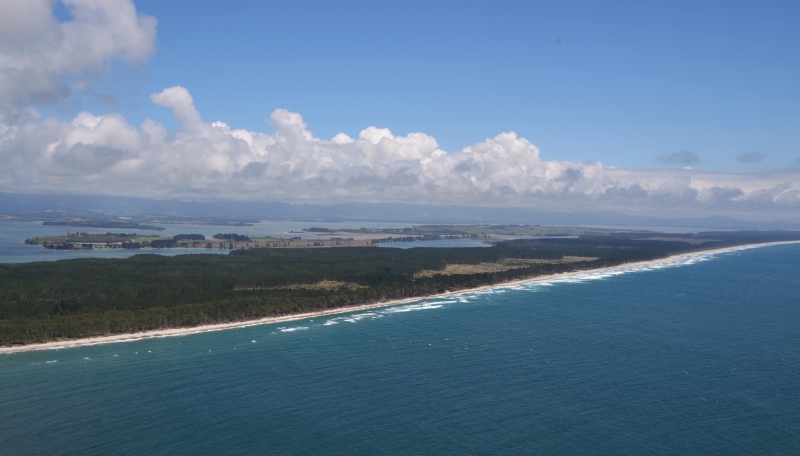 After a lovely walk and a bite to eat we set off south to Rotorua to see the bubbling mud pools and thermal springs …. the mud pools in the town itself were a littledisappointing so perhaps we will see better tomorrow or perhaps it is just the time of year.

Tonight after a bit of a search around for somewhere to stay we have ended up in Waiotapu at the Waiotapu Tavern which has a little area for campers out the back as the three places we tried before here were either full or no-one around to check in…. must be coming into that kind of season!  All good though and Keith has tried his first pint of TUI whilst I had a nice cold glass of Chardonnay in the bar.