As expected, it was a quiet New Year’s Eve.  If there were fireworks at mid-night in Dunedin we didn’t hear them from where we were …. all we heard was the most amazing birdsong when we woke in the morning – very peaceful.

We set off into Dunedin staying on the coastal road this time and the skies were blue and mostly clear so we could actually see where we were going which helped!

We headed to the NZMCA site which was on the North side of the city, stopping briefly to do some washing and empty/refill the tanks as the facilities at the site were unfortunately out of order.  As the sun was shining we thought we would head into town to stretch our and find the tourist office to get some more information on the next part we are about to travel. Whilst looking through the information on Dunedin we came across a walking tour for the ‘Town Belt’ which contained three routes mostly in the parks that ran along the edge of the city ontop of the hill.  With nothing else planned we headed off to join two of them together as between them, they took us up and around and then quite conveniently back to the motorhome…. a lovely ‘skyline’ walk taking in a lot of sites and parks that we wouldn’t have normally seen. 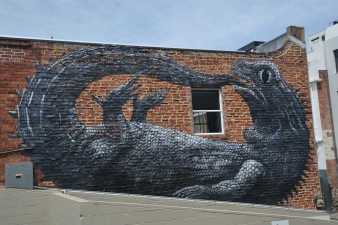 After a hot and humid night and with most things still closed we headed back into Dunedin to do a bit of shopping and follow the ‘Street Art Trail’. 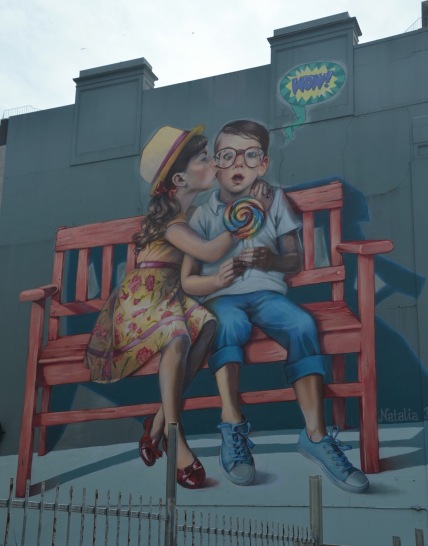 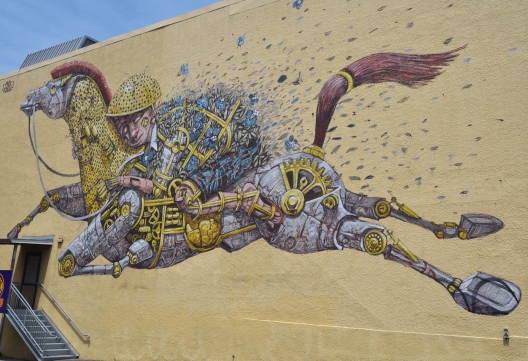 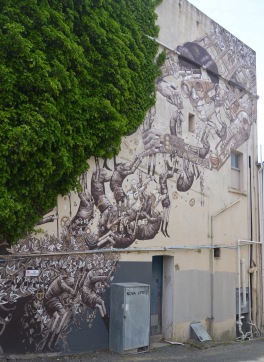 The ‘Street Art’ was incredible with pieces distributed all over the city both large and small. Our favourite was hard to select but I think we both agreed on the eagle above which unfortunately was being slightly hidden by a lorry.  It looks like it is made of metal and when you are up close, it appears to be coming out of the wall at you. 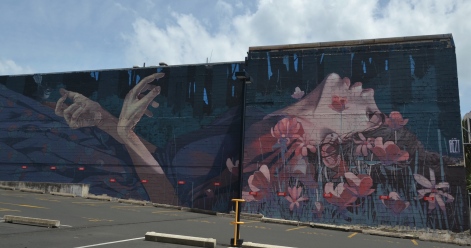 The Street Art was very varied with talented artists from around the world contributing, something that I think most cities should think about doing as not only is it interesting, it also stops the nasty graffiti on the side of buildings.  I think it is fair to say that we liked Dunedin, although I can’t see the relationship with Edinburgh personally ….

After our normal morning routine we hit the road again and headed North up the coast aiming to get to Moeraki to see the Boulders before the tide was fully in and covered them up completely.  They are natural concretions formed over millions of years underneath the sea, slowly being revealed by uplift and then subsequent erosion of the sandstone – strange that they are only visible in one small spot here though…. 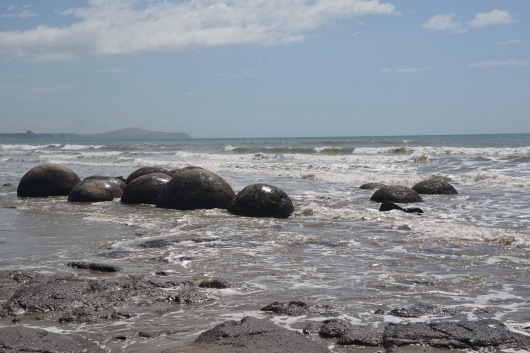 Unfortunately, as the Moeraki Boulders were only just off Highway 1 the place was really busy so after some quick photos, we jumped back into Ava working our way just a little further up the coast to Oamaru.

Oamaru is an odd town but we were pleasantly surprised.  I had added it to the list of places to stop because of the Penguins – no surprise there then – although I have given up on trying to see any more as the only way it looks like I would get to see them would be at dusk (currently around 21:45 here) in an artificial environment set up for tourists which isn’t really the same…. may as well go to the Zoo!

However, having parked up at the A&P Showground (another NZMCA site), we wondered into town via the Whitestone Cheese Co…. lots of lovely cheese (both Goat’s and Cow’s milk) including Blue, Cheddar, Brie, Camembert and Haloumi. We bought some Windsor Blue, which was melt in the mouth and some Brie, coming away from there deciding that other Cheese manufacturers should have a similar set up where you can do tastings, buy cheese boards with wine or just have a Cheese Roll or two with a coffee.  Unfortunately it was the wrong time of day or we would have given the Cheese Rolls – which are apparently a delicacy over here – a go.  For those of you like us who think of a Cheese Roll as a Bread Roll with a slab of Cheddar in the middle – think again.  Each recipe is I am sure different, however the concept is a mixture of cream and strong cheddar melted together to make a warm paste which is then spread on a slice of bread and then in this case, covered in fried onions.  The bread is then rolled and toasted to make it slightly crispy.  We haven’t seen anyone eating one either but will let you know if we come accross one or actually get to try one!  Cheese rolls aside, we had a nice walk round town and out past the steam train and the Steam Punk museum to the Penguin sanctuary. 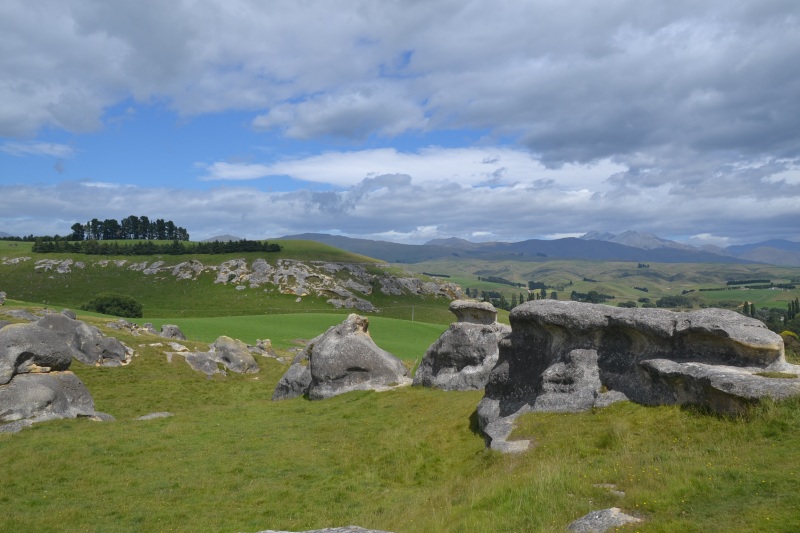 We both headed out for a run in the morning before setting off inland once again towards the mountains.  The route we had decided to take was up through the Waitaki valley with our first stop being the Elephant Rocks just outside Duntroon.

The Elephant Rocks were formed in the same way as the Moeraki Boulders but in addition to the rock formations, the area is also known for its preservation of fossils. It is just unfortunate that there isn’t anything else left in the village of Duntroon to attract people though as the hotel and cafe are long gone and the Vanished World Heritage Center looks like it may be at the point of no return.

Back in Ava and we continued on our route for another 20km or so until we got to Kurow, where we stopped for lunch and headed up the hill to get some great views over the valley.

It was a steep walk up but well worth it and someone had even carried arm chairs up the path to provide a breather along the way should we have needed one!

On the road again and another 25km up the road we pulled off at Lake Benmore to do the circular peninsular walk – well worth the little detour!

The route was only 4km and it started by the dam, heading up into the Pine and Eucalyptus forest without any views, however roughly half way round and the trees parted to give way to beautiful views out towards Mount Cook. 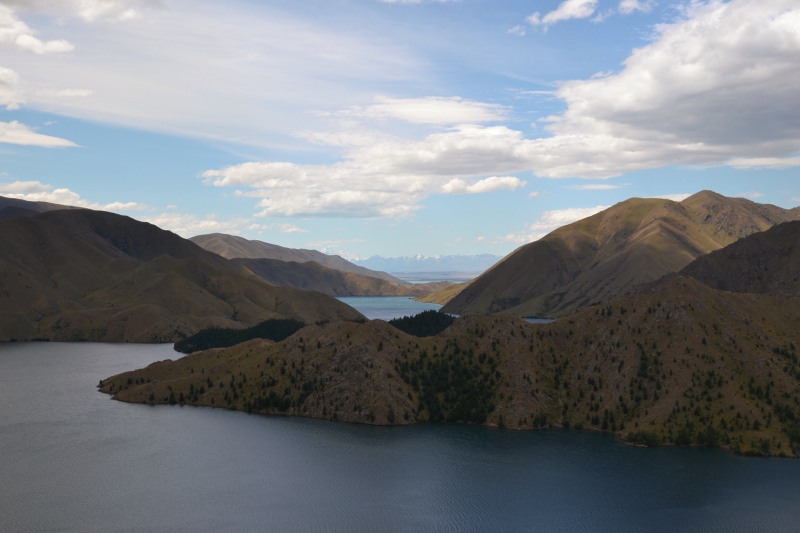 Feeling satisfied with a good couple of walks we headed on to find a place to stop for the night, settling on a DOC nestled between Lake Middleton and Lake Ohau.  The DOC site ($8 pppn) was really busy with lots of families who looked like they were staying the whole summer and a handful of walkers who were doing a one night stop before they continued on the Te Araroa (The long pathway walk that goes from the Northern most tip to the Southern most tip of New Zealand) as well as lots of people water ski-ing and Kayaaking.

We had come here to walk part of the Te Araroa track, so after a shorter run with stunning views of a snow capped Mt Cook at the end of the Turquoise Ohau lake, we headed South East on the trail completing a good 25km walk.  Unfortunately the clouds came in late morning and consumed the mountains so views were limited, hence no photos.

With the forecast showing a day of rain on Sunday we decided to move into Twizel on Saturday afternoon, heading to the Combined Serviceman’s club where we could settle for a few days walking and get some blue cod and chips for dinner…. note to selves that even ‘we’ don’t need 2 scoops of chips between us …..that’s a lot of potato!

We managed to get out before the weather broke on Sunday morning and walked out to the Salmon farm on the edge of town where we bought both some fresh salmon for dinner and smoked salmon for a few lunches – they even prepare Sashimi which was really impressive – my nephew would have had a field day, well worth a visit if passing by.

Sunday’s rain cleared some of the mugginess and we woke to low cloud and fresh air, both of which disappeared pretty quickly leaving us with 25+ degrees and sunshine for a lovely walk down Twizel River  ….. just over 24km there and back, once again not particularly good for photos but the views of Mount Cook on the return leg were pretty impressive.

After fighting off the morning sandflies we hit the Te Araroa trail again heading towards Lake Pukaki and we were pleasantly surprised by the views from our half way picnic point… another lovely 24km round trip – we could have stayed sitting looking at that view for ages!

With one last day in Twizel, today we set off on the Te Araroa Trail in the other direction – back towards Lake Ohau where we were last Friday/Saturday.   Another lovely days walking mostly by a lake …. It is difficult to believe that we will be on the plane home in two weeks time – time is flying by!