I had been holding off on updating the blog as by now, most people know I update it just before we make a trip somewhere to bring everyone up to date…. and this time our trip back to the UK was supposed to be a surprise so I didn’t want to ruin it!

Sharon and Steve – Keith’s sister and husband – celebrated their 30th wedding anniversary last week and the kids, if you can call them that, organised a surprise party to celebrate and we thought it would be rude not to join in! 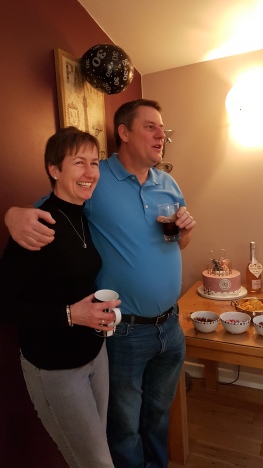 Amazingly, it remained a surprise and Vicky, Felix, Alex and Lauren pulled it off flawlessly – a lovely afternoon / evening.

As we were back in the UK we managed to catch up with the rest of both families, it was a little like ping pong between houses but it worked pretty well all in all, despite illnesses – not us, but others around us.

We set off on the tram to go to the airport just as the sun was rising, roughly the same time as when we are doing our exercises in the morning but as I don’t normally have my phone with me to take a photo I thought I would share the natural beauty that we are lucky enough to see each day…. although as the sun actually poked its head through the cloud it was even better but we were already on the tram and couldn’t take a photo

As is always the way when we get to Alicante we have been a little more static than usual, so the blog is even more limited to food than travels and new places. We have been walking a lot more though as my foot injury was on the mend until a couple of weeks ago with the help of a good physio, massage and exercise.  Unfortunately I did something to set it back just after Christmas and although it has been improving, recovery isn’t as speedy as I would like.  I hadn’t had the chance to get back to the physio until today but already feel so much better despite the pain he inflicted upon me!

Since my last blog, we have continued our gastronomic Vegan adventure – well, we think so anyway – and have even dared extend some of the recipes out to our guests, the Spanish included… although we have alternated with meat dishes as we don’t want to scare them too much! 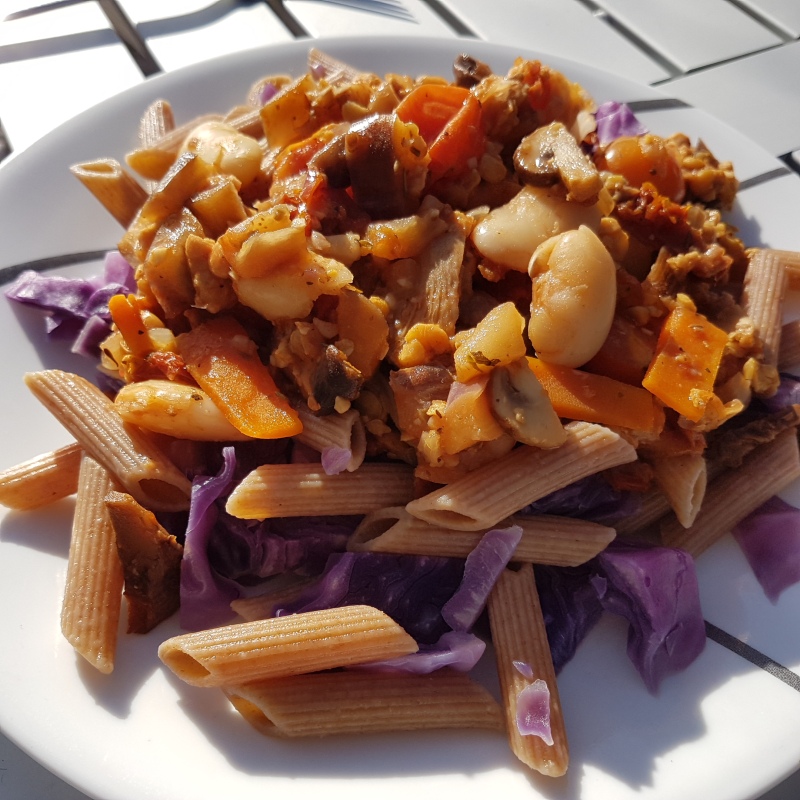 Before Christmas we tried out recipes for a lovely Vegan Bolognese (above) which uses butter beans and some really easy (and tasty) lentil burgers that we cooked on the BBQ that actually stay together, rather than the majority of veggie burgers that fall apart and between the grill. Although that said, we would still would cook them on the hot plate/griddle rather than the wire mesh ….. just in case!

We have started to frequent a different stall for our fruit and vegetables in the market and although more expensive the quality is fantastic.  A few weeks ago Keith decided he fancied trying a pork and pineapple satay recipe, so we bought a pineapple from said stall…. which turned out to be the most expensive pineapple we have ever eaten – but worth it!  It was delicious, so sweet and juicy but it was nearly 10 euros!  Apparently something to do with being picked from the tree when ripe, then flown in… probably wrapped in cotton wool (or perhaps gold)! We will definitely be buying one again but may just keep it to ourselves!  The Pork and Pineapple satay skewers were delicious by the way! 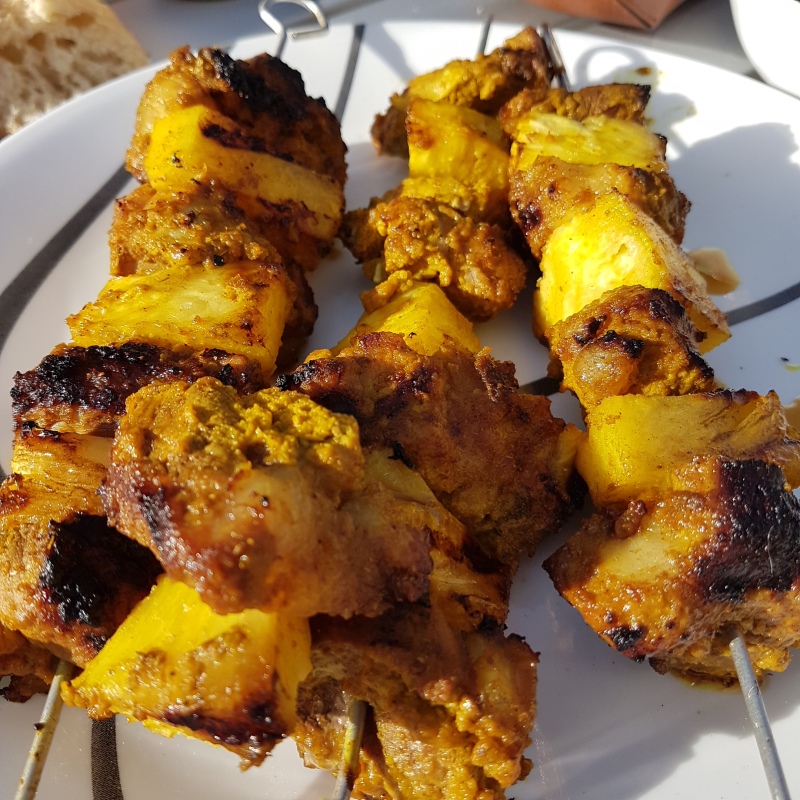 We also tried to do Mushroom Wellingtons but I chickened out of making individual wellingtons when I realised I had made too much filling, so just made it into a pie …… which was also pretty tasty if I don’t say so myself! 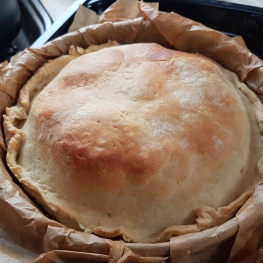 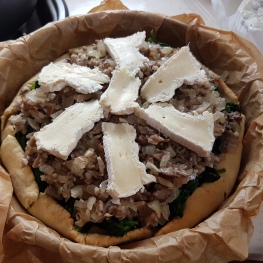 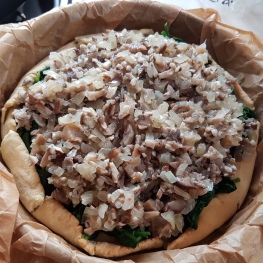 We opted for the stuffed peppers for our first experiment on a couple of the Spanish guys – there were three invited and one dropped out when we said we were doing vegan! –  the two who came were convinced there was meat as the flavour and texture was so full. We then tried out the Vegan Enchiladas on them, which despite being a little too spicy for their taste buds (they are light-weights) were a huge hit….even the sweet potato queso sauce!  It’s one of those recipes which has lots of parts but once it is constructed you can leave it in the fridge until you are ready to cook. It is not only full of fantastic flavours but also one of those one dish wonders that means you don’t have much washing up afterwards as you have done most of it beforehand!

For those with a sweeter tooth, we also found some delicious (and really easy) Vegan cookies…. or at least that is what they call them.  They are basically a mix of nuts, dates, oats and chocolate – what is not to like!

With so many new recipes over the last couple of months, we have had two non-repeaters. Maybe just our taste but all the same something wasn’t quite right. It was a shame as we were both really excited to try a recipe we found for a Mango Stir fry but it just didn’t work…. not even going to post the recipe! The second was BBQ Plantain – or perhaps I should say BBQ Cardboard – all I can say is that we obviously didn’t put enough Salt/Flavour or anything on them as even when dunked in a huge amount of hummus they still tasted like cardboard.

The weather has been kind to us over the last month and although it has been pretty cold over night these last couple of weeks (going down to about 4 degrees) the sun has been shining during the day raising the temperature to around 17/18 degrees. 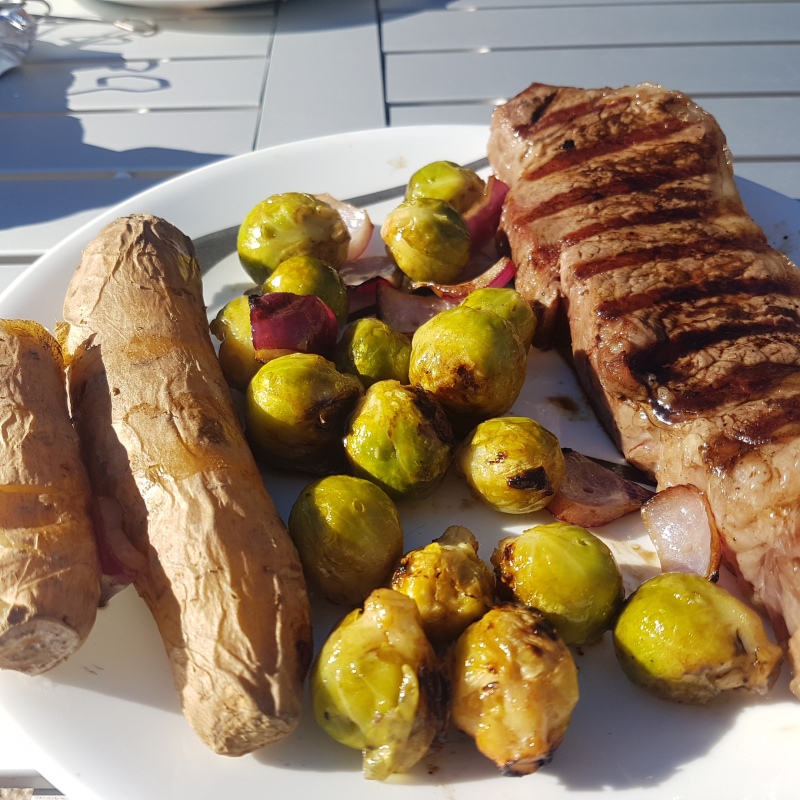 So, not wishing to break our tradition of a BBQ on Christmas Day we found some lovely – albeit pretty large – steaks at our butchers in the market and cooked them alongside baked sweet potato and BBQ Brussel Sprouts.… yep, we found some in the market and with a marinade it worked and they were delicious – possibly the maple syrup helped!!

We have been entertaining quite a bit – as we are always looking for guinea pigs!! –  the Spanish guys, some of the neighbours and we also had another couple who we have got to know quite well over the last few weeks over for New Years Eve who shared our Lentil and Aubergine Moussaka – well, it was only the day before and we had already arranged what we were cooking so they didn’t have much choice…. despite Sally not being very keen on aubergine and tomatoes it went down pretty well, perhaps helped by the reasonable quantity of excellent Cava and wine that was drunk!

Having mostly caught up on the washing and shopping yesterday and today we managed to squeeze in another new recipe on the BBQ before the weather changes this weekend – BBQ Seitan ribs…. tasty, although the recipe I took it from doesn’t quite work as the marinade is too liquidy.  I have updated the recipe inline with what I will do next time as I think it is definately worth another go – despite the plate looking a little ‘orange’!